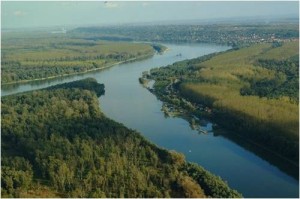 Confluence of the Drava and the Danube near Osijek in Croatia

The river Danube features very prominently in this blog, partly because I live on the banks of this long meandering European river and have lived or worked in eight of the countries it flows through. Another reason is because it can also represent the interconnectedness of ELT blogs, linking people, places and ideas in a spirit of mutual support, kindness and generosity. In this post I’d like to talk about the idea of confluence applied to the blogosphere, the gift economy and William Morris, a lover not of the Danube but of the Thames, and how these three things are all connected.

Rivers are powerful symbols of continuity, movement, change and life in general. The confluences of rivers, where one river flows into another, are also symbolic of many things being interrelated and coming together. Mike McCarthy (2005) has coined the expression the confluent speaker, focussing on a definition of flu­ency that gives less importance to “monologue type utterances”  and more attention to “the cooperative construction of meaning across speaker turns in dialogue.” It is a concept of fluency that emphasises listening and reacting much more than only speaking. 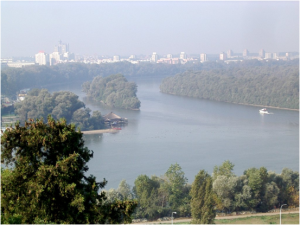 Confluence of the Danube and the Sava in Belgrade Serbia

It strikes me that a confluent ELT blogger might be someone who is respectful to the already established blogs, attentive to the continuous streams of on-going discussions, keen to understand the perspective from which another blogger is writing from, co-operative in acknowledging other contributions and happy to comment whenever they feel it is appropriate. The same turn-taking etiquette may apply as in normal conversation and if the exchange becomes more dialogical, then one can always move away from the blog and take refuge in email. The confluence metaphor is one I like though.  Being alert to new less known bloggers, giving them a helping hand and welcoming them to the blogging community on their blogs, and adding them to their blog rolls might also be examples of a confluent blogger, as well as better known people giving people space on their blogs to other great bloggers round the world as demonstrated recently by Ken Wilson in his series of guest posts.

Something else which made me think of confluent blogging  was Lőrincz Tamás’s post two weeks ago: where he included  and acknowledged a picture which he got from Alec Couros, capturing what is often called the gift culture, gift economy or gift society.

The Gift Culture and the thinning of the walls

“Through interactions with current and former students, the resulting practice has led to a learning environment where the walls are appropriately thinned. Through the guiding principles of open teaching, students are able to gain requisite skills, self-efficacy, and knowledge as they develop their own personal learning networks (PLNs).

Educators guide the process using their own PLNs, with a variety of teaching/learning experiences, and via (distributed) scaffolding. Knowledge is negotiated, managed, and exchanged. A gift economy may be developed through the paying-forward of interactions and meaningful collaborations.” (Alec Couros)

The gift culture illustration  immediately reminded  me of the society which William Morris envisioned at the end of the 19th century in “News from Nowhere”: a society in which we give things and don’t expect anything back in return.

William Morris was inspired by his river the Thames, as was József Attila by the Danube. He is the Hungarian poet who features on the header of this blog. Morris’ book; “News from Nowhere”, is a utopian vision of the future and in it he describes the same kind of gift culture which we are experiencing now in  the ELT blogging community 120 years later. This is a 24/7 culture,  across time zones, where teachers are contributing generously, not expecting money for their articles or a better job, but just enjoying being part of a community committed to understanding teaching and learning better, sharing practical ideas, giving each other support and having a good time in the process, including, in the twittersphere,  playing each other good music.  @annapires is a wonderful example of somebody who does this.

William Morris, a big supporter of working together and supporting each other in communities, was born in 1834, and became  an English textile designer, a writer, a dreamer and a sharp critic of the society he lived in and a passionate believer in bringing about a better society for all. His love of the river Thames gave rise to seven designs, each of which depicted seven tributaries of the river, the one depicted here is the Evenload. 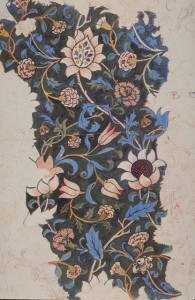 The meandering lines evoke the  river and the tributaries are represented by intertwined foliage doubling up to depict the rivers themselves and the flora that grew around them.

Morris’s work and the Arts and Crafts movement in general were a great inspiration for the Art Nouveau moment which blossomed at the turn of the 19th century on the banks of the river Danube in Vienna and Budapest. (If anybody visits Budapest, I’d be happy to show them around some of the gems which reside in this city. In December last year we organised an IATEFL architecture walk to have a look at them together.)

Many of William Morris’s hopes in News from Nowhere may not have been realised but in the ELT Blogosphere there is evidence of one area which, I’m sure, would have made him happy, and Sara Hannam too, based on her twitter biodata. “Teaching English and wanting a different sort of world really” 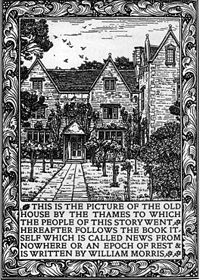 I’d like to finish by sharing with you one short extract from the book. The scene is early morning on the river Thames, near the beginning, when William Guest wakes up and finds himself in a utopian society more than 100 years in the future. He meets Dick, a handsome young waterman and wants to pay him what he thinks he owes him for taking him out in his boat:

“Please take me ashore now: I want to get my breakfast.” He nodded, and brought her head round with a sharp stroke, and in a trice we were at the landing-stage again. He jumped out and I followed him; and of course I was not surprised to see him wait, as if for the inevitable after-piece that follows the doing of a service to a fellow-citizen. So I put my hand into my waistcoat-pocket, and said, “How much?” though still with the uncomfortable feeling that perhaps I was offering money to a gentleman.

He looked puzzled, and said, “How much?  I don’t quite understand what you are asking about.  Do you mean the tide?  If so, it is close on the turn now.” (…) 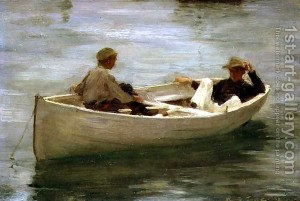 “I think I know what you mean. You think that I have done you a service; so you feel yourself bound to give me something which I am not to give to a neighbour, unless he has done something special for me. I have heard of this kind of thing; but pardon me for saying, that it seems to us a troublesome and roundabout custom; and we don’t know how to manage it.

And you see this ferrying and giving people casts about the water is my business, which I would do for anybody; so to take gifts in connection with it would look very queer.

Have nothing on your blogs which you do not know to be useful or believe to be beautiful:)

Danube waves by Ion Ivanovici, Iosif Ivanovici, Josef Ivanovici or Jovan Ivanović, maybe better known by Hungarians as a name day song, Egy szál harangvirág by Szécsi Pál . This song below on youtube is the original, I think:)

14 thoughts on “Confluent blogging, the art of giving and William Morris”